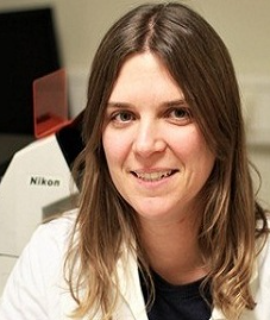 Title : Strategies to increase the passage of large molecules through the blood brain barrier

The diagnosis of Alzheimer's disease (AD), a neurodegenerative disease that affects cognitive functions, remains difficult and the first noticeable symptoms, as well as the detection of current biomarkers, means that brain lesions have already occurred and often for several years. Intensive efforts for the development and the validation of new diagnostic methods to identify early phase of AD, before irreversible brain damage or mental decline, are being conducted. Biomarkers like protein tau oligomers, the toxic form which is present in abnormally large quantities in the brains of people with AD is particularly suitable.
In order to develop a new nuclear radiotracer, the Radiopharmaceutiques Bioclinique Laboratory (LRB UMR UGA INSERM U1039) in Grenoble, France, is interested in the passage of the blood brain barrier (BBB) by large molecules (several kiloDaltons). First of all, several Cell Penetrating Peptides (CPP) have been selected for their potential ability to improve the BBB crossing and to increase their brain availability. A synthetic CPP have also been design to combine and optimize the properties of the previous CPP.  A second strategy has been to take the advantage of the trans-epithelial cerebral transport by using a nanobody (Nb), which consists of the unique variable domain of naturally occurring heavy-chain antibodies (Abs) of camelidae, binding the transferrin with a high affinity and selectivity. Thus, transferrin will act as a trojan horse.
After the production in E.coli and purification, the brain entrance has been followed by different approaches. In vitro, cellular models of BBB developed by the BIP facility (Lyon, France) have been used to evaluate the cytotoxicity on endothelial cells with specialized tight junctions as at the front line of the BBB. The molecules able to cross from blood to brain synthetic compartment have been detected by western blot and ELISA assay. In vivo, radiolabelling with 99mTc followed by pharmacokinetics and biodistribution experiments, have been carried out in mice as well as brain nuclear imaging by SPECT.
Audience take away:
• A synthetic model of Blood Brain Barrier and sensitive methods to follow the passage of molecules are proposed offering new possibility to test rapidly and with high sensitivity the effect of new molecules on the BBB
• This study highlights new issues to improve brain availability of large molecules
• Early stage AD diagnostic is within reach for fundamental research & drug development

Dr. Charlotte Lombardi studied Biochemistry at the Paris 7 University, France and Structural Biology at the Paris XI University.  She received her PhD degree in 2011 after several years of research on viral replication in the team of Dr. Bressanelli at the Molecular and Structural Virology laboratory, France. She then joined the research group of Dr. Dessen at the Institute of Structural Biology (IBS), France, where she studied the type III secretion system of P. aeruginosa, at a molecular level to developed new drugs. After four years postdoctoral fellowship at IBS, she finally join the Radiopharmaceutiques Biocliniques Laboratory, France and develop new strategies to deliver large molecules through the BBB.