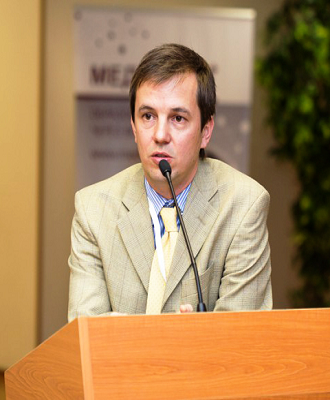 Purpose. To evaluate changes in the brain activation patterns using fMRI in patients with schizophrenia underwent an umbilical cells injections.

Materials and Methods. 15 patients (males, aged 20-40 years) with schizophrenia were included in the study. Remission of schizophrenia with a predominance of asthenic disorders was confirmed by psychiatry examination. Patients received intravenous infusions of group and rhesus compatible umbilical cord blood cells at the average dose of 250 x 106 viable cells per infusion (4 injections at 2 week intervals). Patients also received standard neuroleptics therapy in maintenance doses. A functional MRI scans (3.0 T MRI scanner) with dual task paradigm were performed. Backwards counting by 7 from 100 was used for cognitive load, and in the same time patients were asked to keep a random word in memory as a working memory task. MRI was performed twice (before and in 3 months after treatment). SPM12 was used for data processing and analysis. Results. Patients with schizophrenia before treatment showed deactivation of the anterior component of the verbal working memory loop in the left frontal cortex (P FWE corrected <0.001 for all activation and deactivation zones in this abstract). The deactivation cluster included Brodmann areas 9 and 10. Also we found deactivation zone in the left limbic lobe in the left posterior cingulate gyrus, Brodman area 23. However, patients showed a moderate activation zone in the posterior language system in the left inferior parietal cortex. After treatment deactivation zone in the left frontal cortex significantly decreased in volume and moved to the left and right Brodman area 10. Part of that zone including left Brodman area 9 and anterior part of the left insula was revealed as activation area. Additional activation zone in the anterior component of the verbal working memory loop was detected in the bilateral supplementary motor area. Conclusion. Functional MRI revealed significant changes of brain activation patterns in patients with schizophrenia underwent an umbilical cells injections. This data is important for further evaluation of the pathophysiology of stem cell exposure in patients with schizophrenia.